There have been a lot of rumors and discussion about the $99 Eachine EV100 FPV goggles recently. I already did some teardown, component analysis, component identification, analyzed the “diversity” feature of the receiver, and wrote about how to fix the gray bar problem in my previous posts.

There is another problem with those goggles: No audio. Well at least no usable audio, you only get static noise. I do not know if this is only true for the first batch of these goggles or if this is not working for all versions. Mine was one of the first 1000 goggles that were sold and definitely had no working audio. The good news are that there is a fix. The bad news are that this is, again, no firmware upgrade. It will also require some delicate soldering.

The cause of the problem is so obvious I did not even think about it. Let’s have a look at a picture of the EV100 receiver module: 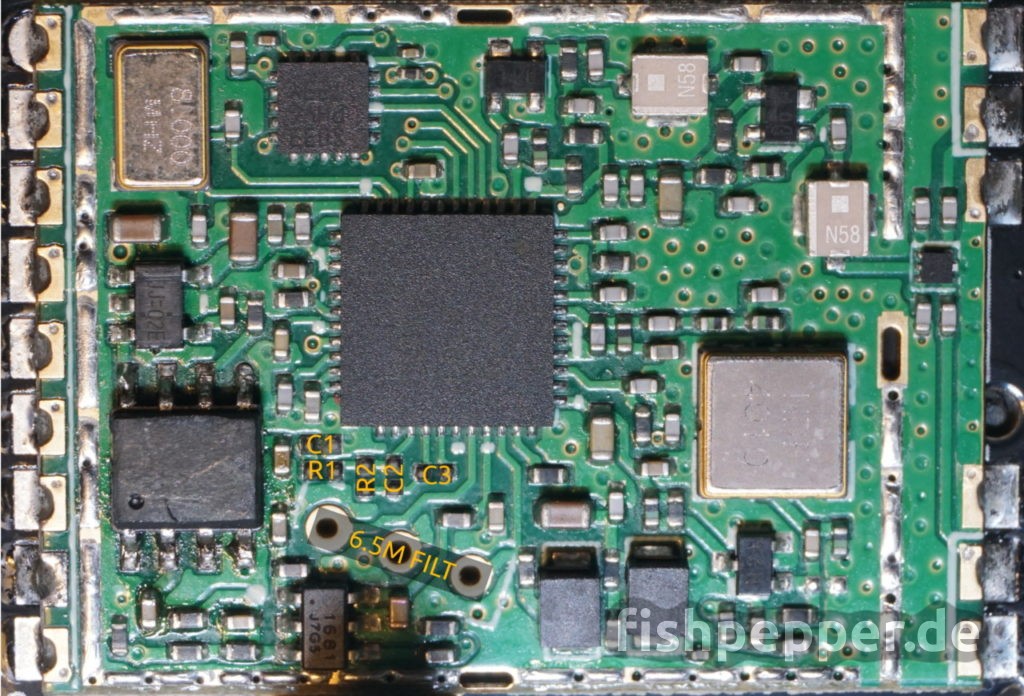 If you have used video receivers PCBs like the good old RX5808 in the past, you might have noticed that big blue blob with three pins on those. Every 5.8GHz video receiver module (hint: with working audio output) has this blob. It’s a 6.5 MHz filter that is connected to the analog audio signal demodulation and conditioning part of the RTC6715 receiver chip. And you know what? This is missing on the EV100 receiver module as Durete on rcgroups found out. But at least for my batch of the goggle that’s not all, the other capacitors and resistors that are missing on my pcb also belong to the audio circuit: The audio leaves the RTC6715, then C2 and R2 do some filtering before R1 passes the audio to the audio output of the module. The capacitor C1 will do some more filtering. Most likely C3 will do some stabilization or some filtering as well. Eachine are you serious? You sell goggles with an audio jack but use a module that does not have the audio part of the rx chip populated?

If you are lucky you are only missing the filter. Unfortunately for my revision the fix is not that easy. You will need to have the missing capacitors and resistors as well and some fine pitch soldering is needed. But what parts do you need? There is no datasheet for the RTC6715 available that lists the component values. Lucky for us you can use a spare or broken RX5808 to get the parts you need: 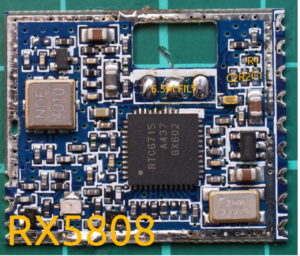 Note that I already removed the 6.5 MHz filter before I took the picture. I labeled all the parts for you on the RX5808 and also on the EV100 module: 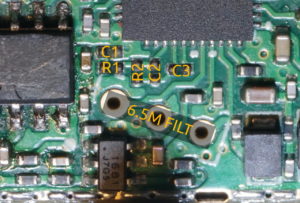 UPDATE: I got hold on the application note and updated the table to show the correct values.

As I had a spare RX5808 from banggood. I just used the components from that one as a transplant. I used my hot air gun to desolder and solder the parts to the EV100. Because the package of capacitor C3 is to big for the pads on the EV100 module I had to use some extension wire. It looks like a mess, I did not want to desolder the receiver module  and was scared to melt some plastic while using the hot air gun.

The first step was to add all capacitors and resistors to the PCB: 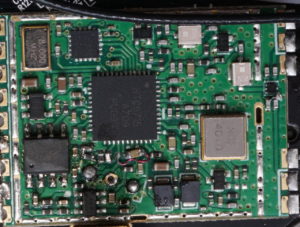 Once done I also added the 6.5 Mhz filter: 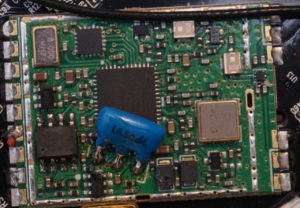 As it turns out you can no longer close the EV100 plastic case with the 6.5 MHz filter installed. I think this will be a job for a dremel rotary tool in the future. UPDATE: Flycry on rcgroups found a nice and low profile SMD resonator that might do the job as well without the need to drill “speed holes” into the EV100 case. I did not test that yet, but it should work, just make sure to get the right frequency (TPSKA6M50B00-R3).

Now comes the moment of truth: Connect a battery, fire up your quad … and … tadaa… Working audio on the EV100! This is probably the first time a EV100 goggle had a working audio output — nice!

I hope this helps and you enjoyed the tutorial. A list of previous and newer posts regarding the EV100 can be found in this list:

16 thoughts on “Eachine EV100: no audio problem — cause, fix, and technical background”