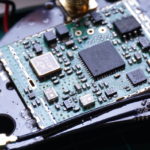 There have been a lot of rumors and discussion about the $99 Eachine EV100 FPV goggles recently. I already did some teardown and component analysis in my previous posts. The internet forums are full of people complaining about the small FOV and the missing or “not real” diversity feature. The small FOV can be checked easily, just try the goggles on your own and decide if this suits you or not. But what about the diversity feature? Does the EV100 actually use both antennas? Is one just decoration? How does it work? What is the difference between real and “fake” diversity? Questions over questions and wild speculations in numerous youtube videos… Let’s clear those  important question right now once and for all:

If you are new to the quadcopter scene you might be thinking what is all this fuzz about diversity? I would say the most common implementation on video goggles is an implementation called selection combining. You basically have two antennas and two receivers. Both receivers are tuned to the frequency your quadcopter is sending on. Both will measure the signal strength (RSSI) on this channel(!) and the goggle will show you the picture of the antenna/receiver combination with the highest RSSI and most likely the best image. So in order to do it right you will need the two receivers: You can not measure the signal strength without having a receiver that is tuned to the proper frequency your video transmitter is sending on.

Of course, there is a cheaper (worse) way to implement something like switched combining diversity. An example for this are most (or all?) FrSky RC receivers: You have two antennas, one receiver, and a controllable high frequency switch. The receiver knows when a new control frame should have arrived (every 9ms in case of FrSky). If a frame is lost the receiver assumes bad reception and switches the antenna. In case of the FPV goggle one could switch to the other antenna on luck or if the signal strength reading gets to low. But then it is already to late. You have experienced some noise or some dropped frames.

In order to do proper diversity you really want to switch the antennas before you loose the signal. And it’s not that expensive to implement, just add another receiver chip for less than $5 and some software logic. Really a piece of cake… But how did Eachine implement it? Time to void warranty (again)!

Lucky for you I already cracked mine open the very first minute it arrived. So let’s have a look at the receiver PCB: 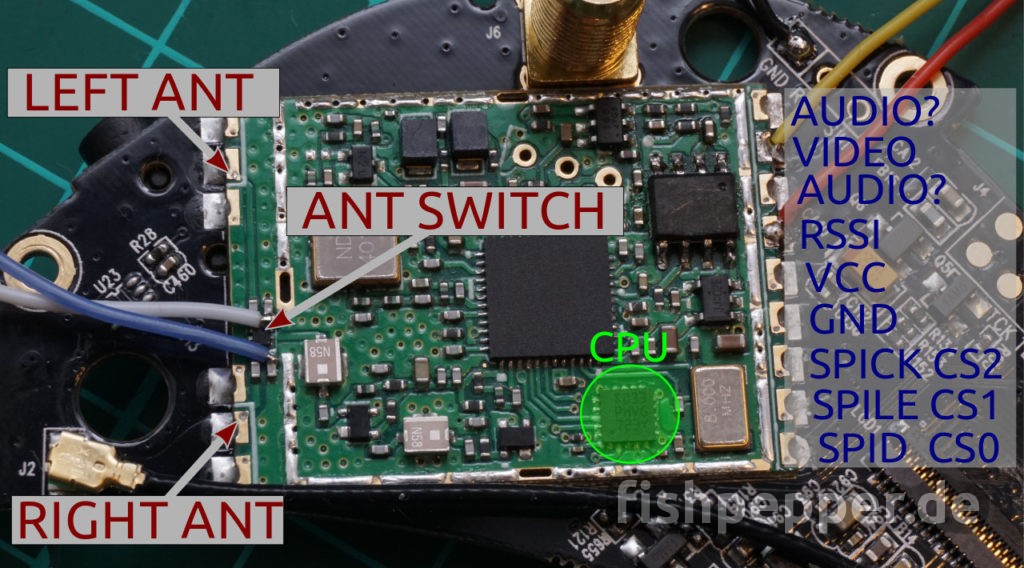 On the left you can see both antenna inputs. Which is good, both antennas are connected and not just adornment. Both signals go to a small high frequency antenna switch before passing various filters and entering the RTC6715 video receiver chip. On the lower right you see a small microprocessor. On the right side of the module you can see the connections to the goggle PCB. We have both (?) audio channels, the video signal, an analog RSSI output, power supply, and the RTC6715 SPI control pins routed to those pads. The rest seems to be the normal electronics every RTC6715 receiver has.

Let’s pick up the good old scope and do some traces! The first trace shows the signals when there is no video transmitter active — thus the receiver is seeing a (very) bad signal quality. The RSSI, measuring the signal quality, is the green signal on the top. The antenna switch signals are purple and blue and the video data is plotted in yellow: 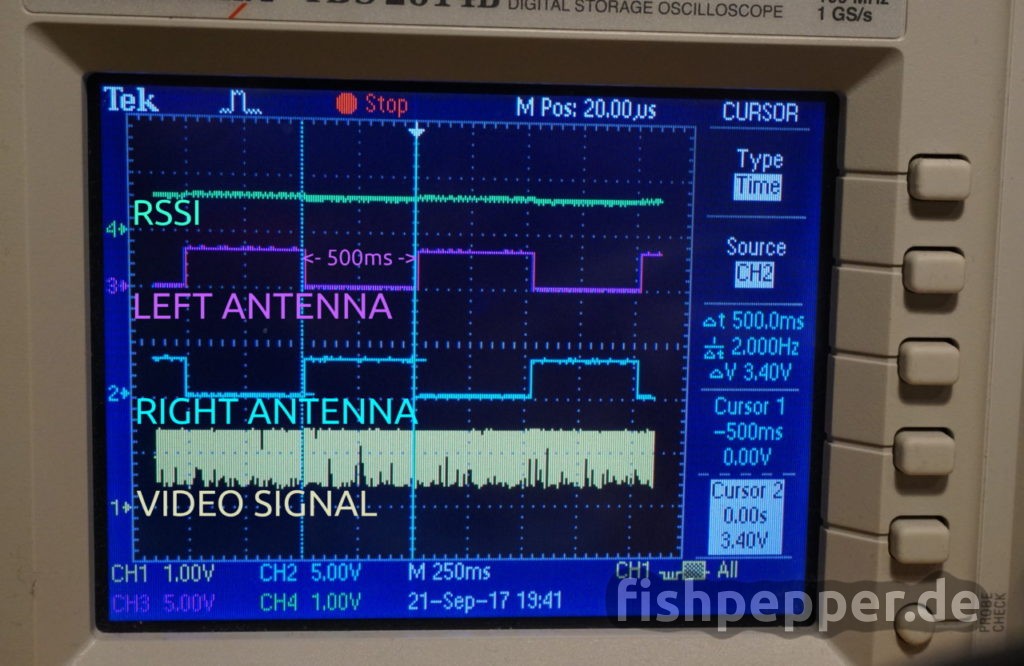 That’s quite interesting! I was not expecting this. The receiver switches the antennas only twice a second (500ms)! Hmm ok. Maybe this is just the initial search mode, let’s give it a try with a weak signal: 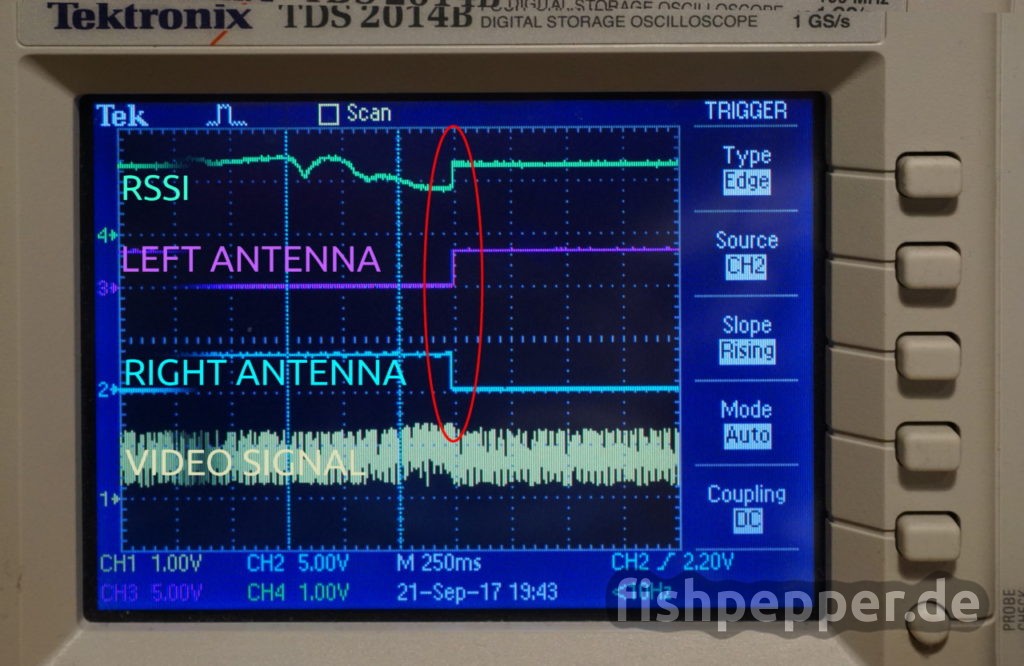 Interesting. Switching to the other antenna happens more or less instantaneous on signal loss. But I did not expect this 500ms delay between further switching. This might have to do with the time the RTC6715 needs to lock onto the signal and update the RSSI. There seems to be a RC low pass filter on the receiver PCB as well. It seems like the antenna switching is handled by the CPU found on the receiver PCB itself. It connects to the antenna switch and the analog RSSI output of the RTC6715. The SPI bus of the RTC6715 seems to be routed only to the external pads so it looks reasonable that the STM8 on the main goggle PCB will do the frequency selection etc.

So what does this mean? Well, this is switching diversity — or switching after a bad signal and hoping to be more lucky with the other antenna. In my opinion the selective diversity with two receivers is far superior to this. I would always prefer having two receivers and getting to see the strongest signal before losing some frames. Of course it’s still better than only one antenna and the video reviews show that it works ok-ish most of the time. It would be interesting to get a behind the scenes view why Eachine choosed to implement it like this. Those $5 spent on proper diversity would make them sell much better…

If you want real diversity it looks like its going to be quite easy to fit a fatshark style diversity module to this goggle. If done properly you will not need any external step down voltage regulators as shown in youtube videos. All necessary voltages are readily available in the goggle already. Maybe I will write a tutorial on this in the future but for now I will stick with the inbuilt “diversity 🙂

That’s it for now. You can find all my previous and newer posts about the EV100 in this list: