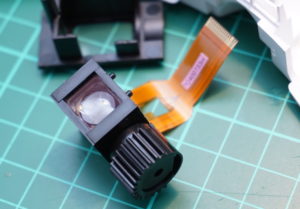 In my previous post regarding the display module of the $99 Eachine EV100 googles I tracked down szsonicom as a reseller (?) of the display assembly. As it turns out the actual manufacturer of the display is CITIZEN. When you browse their product portfolio you can see a picture of the display assembly that is found in the EV100 goggles. There is also an U.S. subdivision of citizen finedevices that lists this module. Thanks to Paulo for the hint!

In the meantime I got hold on the datasheet from szsonicom and there is one interesting bit of information that got me puzzled before I got the email from Paulo. The first page of the datasheet includes the following lines of text: 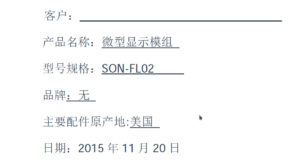 As my chinese is “not that good” (null) and you can not always trust google translate I was sceptical on this. The translation This reads “Main accessories Country of origin: the United States“. Strange… A Chinese company producing a module which main part is made in the U.S.? I thought this can’t be true and did not investigate into this further. But it now makes sense, the module seems to be made by an U.S. subdivision of citizen finedevices. Interesting.

Back to the module. As it turns out the display requires the data to be in the YCbCr422 format. The conversion between the RGB output format of the MTS706  is not straightforward to implement, YCbCr works quite differently as the RGB color space that you are used to. There is also something more special going on with YCbCr422: That format uses a technique called chroma subsampling. The Y value represents the luma information and is transferred with every pixel at a high bandwidth. This keeps all sharp contours and corners intact. The two chroma components (basically the color information) is transfered at the half resolution. This saves bandwidth and is not causing much image degradation as the human visual system is more sensitive to changes in brightness as in changes in color. Some people reported that e.g. the grass switches from green to bright pink on some occasions. This might have to do with some colorspace transformation issues. Interestingly the display module is doing a YcbCr to RGB conversion right after receiving the datastream — DOH. This might be the case as this display was probably developed as a viewfinder for video cameras that use the YCbCr format a lot.

The display technology is listed as FLCoS and the monochrome chip in a so called “Field sequential color” mode. This means that the display itself is basically a grayscale display and is illuminated by different colored light sources in a sequence. In simple terms the screen is successively illuminated by a red light source, then green, and finally blue. The slowness of the human visual processing combines this sequence into one steady image. This drive mode is commonly used in some types of projectors and e.g. google glass seems to use it as well. The listed framerate indicates that the screen is refreshed 6 times as often as the input signal, most likely the illumination pattern is RGBRGB to achieve a more stable impression.

A short comparison between the listed schematic and the EV100 display module flex assembly shows a lot of matches but I did not dig deeper into this.

Szsonicom allowed me to share the full datasheet via email with my readers, if you are interested into it just write me an email.

A list of all my previous and newer articles on the EV100 can be found in this list: