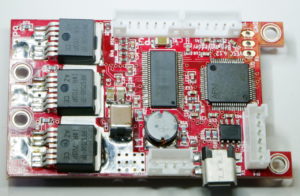 It’s all about power — At least you get the impression when you follow the latest builds showing up on youtube. When I started with building quadcopters it was quite common to use 3S batteries with three lithium cells in series. Right now most quadcopters (other than micro builds as e.g. my pepperFIISH) will be using at least 4S batteries.

Recent builds are already using 5S- and some people started to experiment with 6S batteries. The reason is simple: The higher the voltage the less current you need to deliver the same amount of power. Power equals voltage times current. So increasing the supply voltage decreases the current and less current means that you can use e.g. thinner wires because resistive losses get smaller.

More powerful motors, that have to deliver constant power over longer periods of time as the high end racing copter with it’s batteries that are depleted after less than 2 minutes of full throttle, use even higher voltages. A very common example is the typical e-bike. Most of them use at least 10S batteries with 36V (42V fully charged). In order to deliver the typical 250W those motors can deliver you end up with less than 7A of current — peanuts! Doing the same with 3S would require around 20A of current — bigger wires will be needed and more resistive losses will occur.

So it makes sense to use higher voltages for more powerful motors. This is where the VESC by Benjamin Vedder really shines:

Wow! this reads really amazing. This ESC is used a lot by people building electric skateboards. My application will be a bit different, it neither has to do with skateboards nor with quadcopters. The motor I am going to use is rated at 10S and was secured by a 50A fuse in its original application: 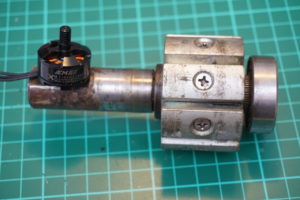 Inrunner, beautiful curved magnets held in place by “professional adhesives”, … And no, I am not talking about the tiny emax 1806… But more on this later! (Can you guess what this is going to be used for? Let me know your guess in the comment section!)

I could not find a reliable seller having the latest v4.12 version in stock with reasonable shipping times. So i though it is open hardware, why not build this beast on my own? No sooner said than done: shopping time! Ordering the parts was easy, Benjamin lists the mouser part numbers on his website. Ouch — the parts are quite expensive, alone the FETs weight in at more than 22 Euro… At least I will learn something building those, so don’t hesitate and pay the 84 Euro for the parts alone.

Next stop PCB ordering. Wait, this is a 4 layer board and quite big with roughly 65x39mm. OSHPark is to expensive. China takes ages (and is expensive as well!). My favorite german PCB manufacturer multicb would make 10 copies for around 65 Euro! That beats china — wow! But what should I do with 10 PCBs? As it turned out there are multiple other possibilities for buying a single empty PCB:

It looks like (1) and (3) offer the same boards. When I ordered mine, seller (2) was not listing this item so I bought mine from canada: 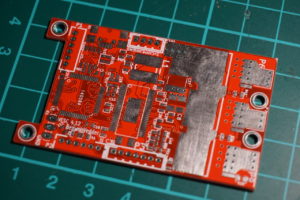 The PCB looks quite good. Sadly no gold plated pads but still high quality. I am going to document the process of soldering and setting up this beast with follow up posts in the coming weeks — stay tuned for more!