We had a tinyFISH FC soldering party last weekend. I met with some friends and we soldered a total of four tinyFISH FCs — there will be four more pepperF1SH copters soon! 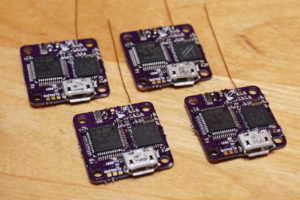 All four boards are working fine, I just finished flashing the betaflight and opensky firmware to the FCs and did a simple 1-point current sensor calibration.

Everything works as expected but it seems like the current sensor circuit varies a lot between different boards. I had to use scale values of 1900-2500 for those four boards. This seems a lot (24% difference), i used 1% components for the feedback resistor and for the shunt as well — strange. Needs further investigation 😉